History of the Breed

Very little is known of the actual origin of the Soft-Coated Wheaten Terrier. Like many breeds this has been lost in the mists of time, although from old pictures and records the breed has been traced back at least 200 years in Ireland. For many generations there was hardly a farm or small holding in Ireland without its attendant Wheaten Terrier, loved and valued for his many sterling qualities, being used to herd cattle, to pursue and destroy vermin and to enjoy a day’s shooting in the company of his master. In short, this is a general, all-purpose dog. 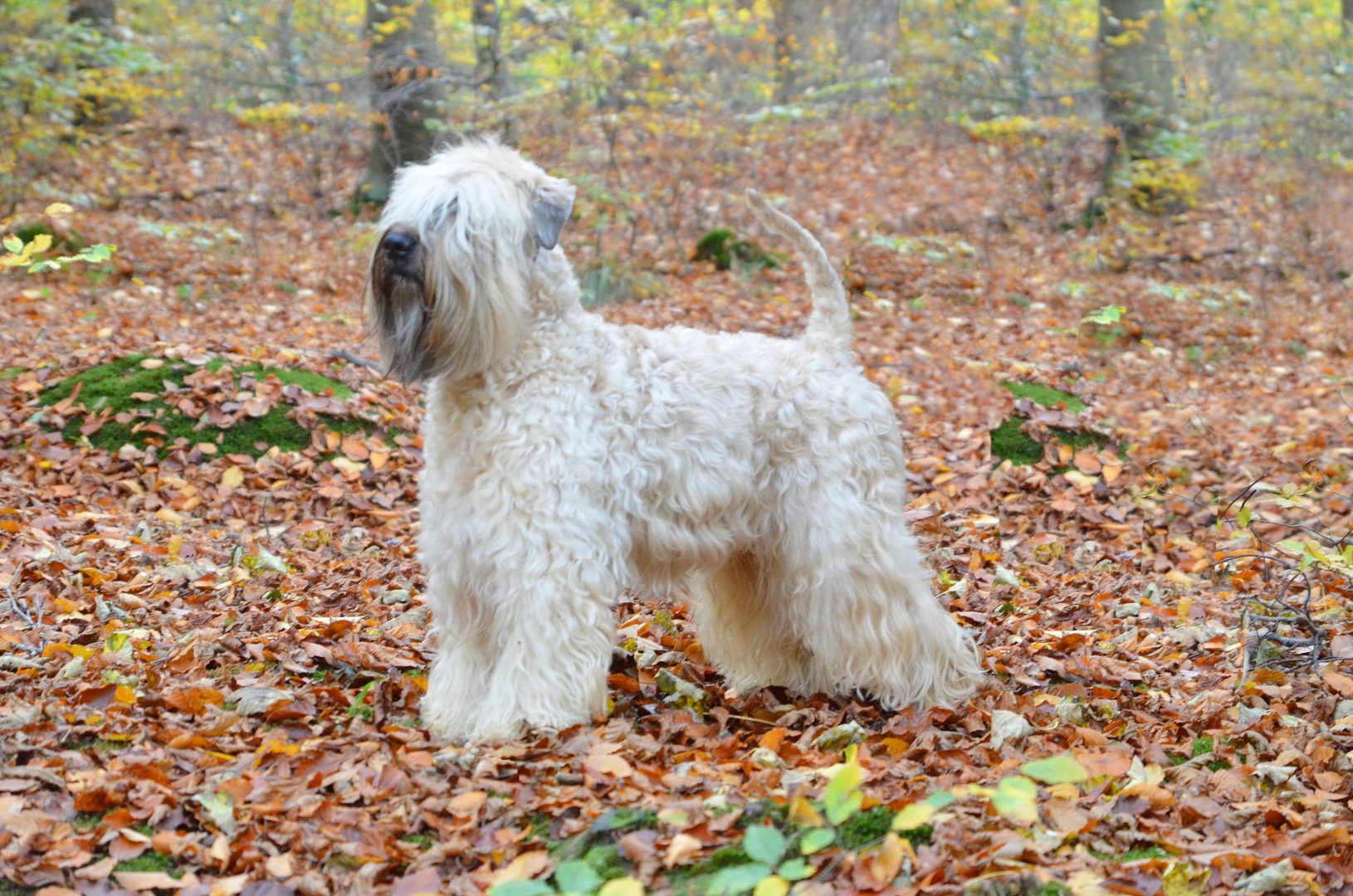 It is recorded that the Soft-Coated Wheaten Terrier is the oldest Irish breed of terrier and is said to be the progenitor of the Kerry Blue and the Irish Terrier. Legend tells us that a large blue dog swam ashore from a ship wrecked in Tralee Bay about 200 years ago. This blue dog became known for his fighting prowess, much prized in those days when dogs were bred for the popular dog fights.

He mated the native Wheaten Terrier and from this originated the Kerry Blue. Wheaten-coloured puppies have appeared in Kerry Blue litters from time to time. Likewise in Irish Terrier litters there is sometimes a throwback to the soft coat. There is no record of cross breeding in the Wheaten Terrier and he remains much as in the earliest records of him.

The Wheaten Terrier was rapidly dying out in Ireland and it was not until they became almost extinct that the late Dr. Gerard J. Pierse, realising their great potential, saved them from total extinction. It was at a field outing for terriers that the conduct of a Wheaten Terrier attracted Dr. Pierse’s attention. Together with Mr Patrick Blake and several others, he determined to have the breed acknowledged by the Irish Kennel Club.

After a long and hard struggle, in August 1937, he succeeded in getting the I.K.C. to recognise them as a distinct pure bred terrier. Soft-Coated Wheaten Terriers had their first classes as a separate breed at the St Patrick’s Day show in March 1938. A dog called Kingdom Leader, owned by Mr. P. Blake, became the first champion closely followed by Dr. Pierse’s own dog, Ch. Charlie Tim. The breed also made a name for itself in the Terrier Working Trials with Bench Champion Kingdom Leader becoming the first of the breed to win the title Field Trial Champion, a rare accomplishment for a terrier.

The first known Soft-Coated Wheaten Terrier to have been imported into England was in 1939, litter sister of Ch. Cheerful Charlie owned by Dr. Pierse, but nothing more was heard of this bitch. Mrs. A. K. Vardy of Sheffield initially imported two dogs in 1942, Cheerful Peter (Ch. Charlie Tim ex Lambay Heroine) and Sandra (Eire’s Leader ex Coolaura Lass) and persuaded the English Kennel Club to recognise the breed in 1943.

Therefore it is to her that the honour of pioneering the breed in England must go. Her Wheaten Terriers won many prizes in the show ring, despite the difficult wartime conditions prevailing. Cheerful Peter and Diana of Deolali (Silver Leader ex Wheatilocks), bought from Dr. Pierse and imported by Dr. T. Murray, produced what was stated to be the first litter bred in England.

Among other dogs imported in the next few years was a dog called Firecrest (Glenflesk Captain ex Cheerie Be), owned by Lady Kitty Ritson and Mrs. D. C. Long. He was later sold to Miss Freda Barlow-Massicks, a founder member of the Soft-Coated Wheaten Terrier Club of Great Britain and its president for nineteen years. Firecrest, his registered name now being Glenguard Mourneside Firecrest, had the unusual distinction, for a little known breed, of being Best in Show at Romford, Essex, under the late Mr. Victor Lewis in 1946. Firecrest, with a bitch brought from Ireland by Miss Barlow-Massicks, Glenguard Erris Lady (Mick Cosie ex Wheaten Lady), sired some fine puppies and these formed the main basis of the breed in this country.

Gradually, as more puppies were seen, interest grew. The characteristics of the Wheaten Terrier were greatly admired and led to the breed becoming better known and establishing itself firmly with many terrier lovers. A handful of enthusiasts formed a club in 1955, ably led and tirelessly assisted by the owner of Binheath Kennels, the late Mrs. Corisande Read. A year later the club was registered with the Kennel Club as the Soft-Coated Wheaten Terrier Club of Great Britain.

Formed by breeders and enthusiasts to promote the interest of the Soft-Coated Wheaten Terrier and to enable owners and breeders to meet and get help and advice on matters pertaining to the breed, the club has been very successful. In recent years it has gained a membership equal to that of many numerically larger breeds. 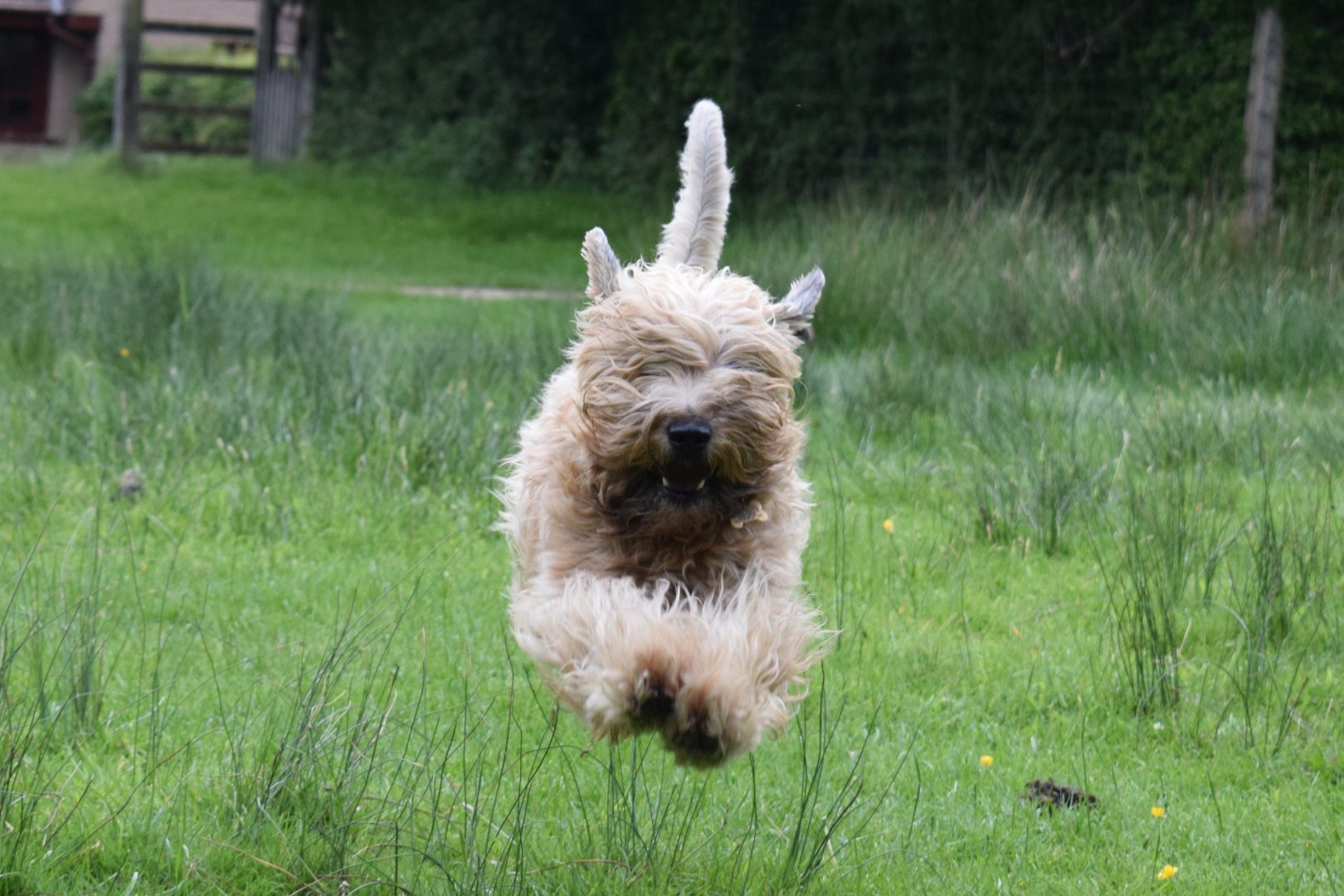 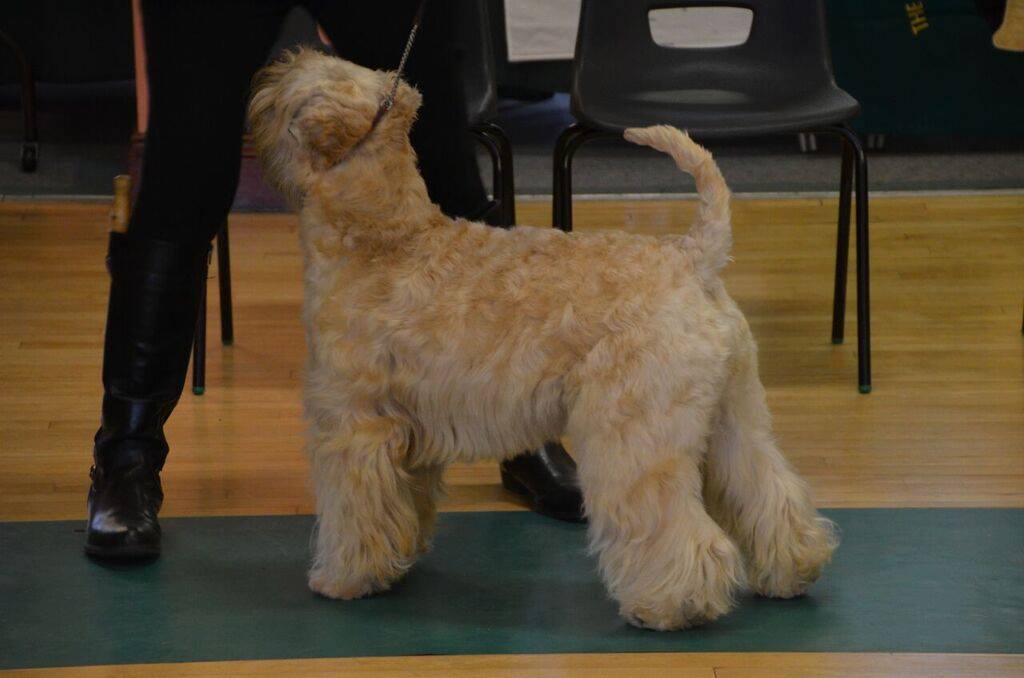 The first Soft-Coated Wheaten Terriers arriving in the UK, had the Wheaten Terrier coat now referred to here as the ‘Irish Type’. The heavier Wheaten Terrier coat, which appeared in the late 1950s, attracted much comment and early breeders concentrated on developing this popular look. Only a few continued to produce dogs based on the original Irish lines. The Irish breeders understandably objected to this divergence of type from that of the country of origin and this led to Anglo-Irish relations becoming somewhat strained for many years.

The most marked difference between the two “types” is in the late puppy and early juvenile stages. The Irish puppy is unmistakably a little terrier. His coat is often quite harsh to the touch but with time this ends up as silky as those with soft coats. Some pups may have a very sparse coat while others are thicker. The heavy-coated puppy on the other hand goes through a very fluffy ‘teddy bear’ phase. It is easy to forget that he is a terrier. (While both coats are fine and require daily attention during the change to the adult coat, the heavier coat is longer and denser and can be more difficult to maintain.)

The heavier coat looks mature much sooner than the lighter Irish coat. This has added to the popularity of the heavy-coated Wheaten Terrier for the show ring, as they can compete with their elders at a much earlier age. The Irish youngster, on the other hand, doesn’t have his full coat until he is about two and a half years of age, appearing “all legs” and unbalanced at a year or so. Close examination of the hair on the heavy-coated juvenile will show that this too is not yet mature in colour or texture, although the overall appearance at 12 to 15 months is that of an adult.

The coat of the Soft-Coated Wheaten Terrier is one of its particular features – the colour and the texture being emphasised in the name of the breed. However, other aspects of the dog are important as well. Soundness, conformation, and temperament need to be considered when breeding. Breeding for coat alone can, and does, eventually produce problems.

Wheaten Terriers in the 1960s and 1970s were closely bred as there was little alternative to the limited stock available. When renal dysplasia was diagnosed as being a breed problem at the beginning of the 1980s, new bloodlines were essential. Several dogs were imported from the United States, Europe and Ireland. A number of English bitches were mated to Irish dogs, which also helped to expand the gene pool. As a result of extensive use of these new strains, the breed in the UK lost uniformity of type. The incidence of kidney problems has dwindled with no new confirmed cases since 1993. Another result of the out-crossing during this period was an improvement in temperament.

Coat continued to become heavier and heavier with resulting problems for their owners in grooming and presentation. Some breeders now seem to agree this has gone far enough. There is increased interest in the Irish Wheaten with growing numbers of these seen in the show ring and more being used in breeding programmes.

Trimming has been resisted strongly in the UK. Although the Soft-Coated Wheaten Terrier Club of GB does not encourage stylising, those who participate in the show scene do like to see the Wheaten Terrier tidied to a smart terrier outline. Moderation in presentation is urged as the Wheaten Terrier is a ‘natural dog’ whose coat should be of sufficient length to flow as he moves. The “battle of the scissors” in Ireland was waged in the 1940s with acceptance of tidying and the inclusion of a trimming clause in their Standard of Points. They aim for a neat, clean, but not sculpted, outline.

The correct coat texture cannot be stylised or moulded in any case. Wheaten Terriers are tidied to varying degrees in the rest of Europe, with each country seeming to have its own style of presentation. In North America presentation verges on stylising in most dogs.